Marvel Vs Mario! When mighty tyrant villains collide, who will prevail? The Lord of Latvaria, or the King of the Koopas?

Princess Peach is tied to a wooden stake at the top of a mountain; volcanoes erupt in the distance around her as she tries to no avail to escape. As she continues to struggle, a few meters away is a large throne; on it sits Doctor Doom, with his back to the princess as he finishes reading two books. Standing up, he flicks his fingers, and the books vanish in a blast of electrical energy, along with his throne.

Doom: Silence! The time of Doom has come!

Doom spreads his arms, and the plateau on the top of the mountain begins to glow. Streaks of fire shoot out from Doom’s feet and carve through the ground, forming a complex pentagram around the plateau, with a screaming Peach in the middle. Slowly, the air around Peach gets distorted, and sudden flashes of other universes such as Metroid, Zelda, and Kirby appear; Doom has been planning a large-scale invasion.

As Doctor Doom takes a step, a large fireball shoots down from the sky and breaks one of the lines in front of Doom’s foot; the pentagram vanishes as Doom looks up into the air.

The object Doom is looking at is a large white bowl with a clown face on it; inside is the mighty King Koopa, Bowser, who leaps out of his ride and lands on the mountain with a massive thud.

Bowser: HEY! I thought something was up when the dumb plumbers invaded my castle before my schemes had started. Listen, green man, nobody kidnaps the Princess except for ME!!!

Doom waves his hand and fires a bolt of energy at Bowser, but the Koopa backhands it right back towards Doom; the villain protects himself with an automatic forcefield, and is intrigued to see Bowser’s hand glowing with purple dark magic.

Bowser: You think you’re so tough? Come on!

Doom: Hah! A minor distraction! I do as I please, and I answer to NO ONE!

Announcer: CRANK IT TO ELEVEN! READY!

Bowser reaches out with a slash from his mighty claws, but Doom vanishes before his eyes; in a split second, he reappears, along with two identical Doombots. The three surround Bowser and each shoots him with a powerful laser blast, causing the King to grunt in pain. One of the three then rockets in and kicks Bowser into the air, where another punches him a few times. The third flies into the air and kicks Bowser again before covering his body with electricity, stunning the Koopa in the air. All three Dooms, positioned below Bowser, launch large lasers from the palms of their armour, which merge into a massive laser that pushes Bowser into the air.

Bowser roars and retreats into his shell, in which he starts to rapidly spin around. Now descending fast to the ground, he shoots through the laser, dispersing it along the way, and smashes into the surface with enough force to stagger the three adversaries. As he gets up on his two feet, he spins around while spitting an intense stream of fire from his mouth; the two Doombots turn to ash, but Doom himself activates a forcefield to hold off the flames. He deactivates his shield upon the flames stopping, but is rewarded with a jumping kick to the face from Bowser, which sends him flying to the other side of the plateau.

Doom gets up, only for Bowser to teleport behind him in a puff of purple smoke and claw twice into his back. Doom uses rockets hidden on his body to flip through the air and rocket towards Bowser, but his attack is blocked when Bowser catches him out of the air. Hoisting him over his head with one hand, Bowser laughs before smashing Doom into the ground; a few quick spins in his shell scrape Doom along the stone in a circle before Bowser throws him away and knocks him out of the air with an intense fireball. Doom lands on his feet, and beneath his mask, his eyes show an expression of pure fury.

Bowser runs at Doctor Doom again, each footstep shaking the ground, but Doom is unwavered.

From Bowser’s perspective, Doom waves a cape and disappears into the air, leaving a small missile silo in his place to surprise the Koopa King. Bowser is bombarded with several missiles, and though he barely withstands the blasts, he is occupied enough to miss Doom descending from above with a kick that flattens Bowser to the ground. Doom punches the ground and creates an electrical blast that sends Bowser back up into the air, whereupon Doom punches him multiple times, before retreating backwards into the air with his arms spread wide like a cross. Several bolts of lightning shoot down from the sky and strike Bowser dead on.

Bowser yells in pain as he gets continuously blasted, and soon he is covered by a thick shroud of smoke. From his position in the air, Doom gives a small chuckle, but his eyes turn angry upon hearing Bowser’s laugh echo throughout the mountain. Down below Doom, Bowser rises out of the smoke, rapidly growing larger; he steps off the mountain to avoid crushing it as he grows, and soon, the Koopa King is twice as tall as the mountains surrounding them, and oozing with magical energy throughout his body. Bowser laughs and launches a punch towards the miniscule Doom, but is absolutely shocked when the Lord of Latveria stops it with his bare hand. Doom flicks his cape away and reveals a small glowing box on his belt, with the label “Power Siphoner” on it. Bowser gains a sweat drop as Doom absorbs his power, and grows to a size to rival his opponent. The two giants exchange three punches that shake the volcanic landscape around them, but neither backs down.

Doom: This game is over! PHOTON ARRAY!

Doom’s eyes glow a fierce shade of red, and two thrusters on his feet start to fire as the two fall. Once enough power is built up, he rockets himself around in the air, breaking free of Bowser’s grasp and reorienting himself with his legs on top of the Koopa King’s face. They continue to fall faster and faster as Doom crosses his arms and reverses the direction of his thrusters.

Now it’s Doctor Doom who’s in control, and he shoots downwards, pushing Bowser down with him. The two crack the sound barrier before hitting the ground, where the impact creates a massive crater and shatters Bowser’s skull.

Doom and Bowser’s bodies shrink down to their original size as Doom wipes the blood off of his boot. He then snaps his fingers, and his throne appears out of the air next to him. As he sits on it and floats above his former adversary, Doom watches as his pentagram from earlier forms again, this time around the body of Bowser. But it isn’t just Nintendo Universes that he stares into; with the spell at full power, he gazes even further, with nothing but conquest on his mind. 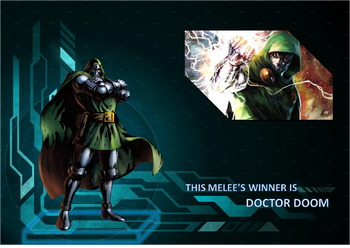 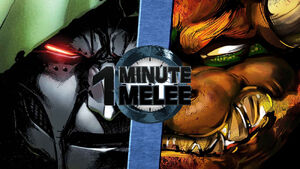 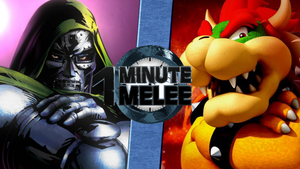 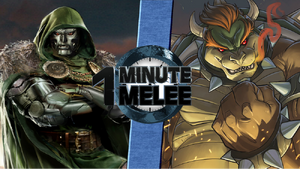 John1Thousand
Add a photo to this gallery
Retrieved from "https://one-minute-meelee-fanon.fandom.com/wiki/Doctor_Doom_vs_Bowser?oldid=75129"
Community content is available under CC-BY-SA unless otherwise noted.