From the animators of Death Battle, this is ONE MINUTE MELEE! WHERE ALL THE FIGHTS ARE SETTLED IN 60 SECONDS!

RESEARCH?! THERE'S NO TIME FOR RESEARCH! WE PUT 60 SECONDS ON THE CLOCK! AND LET THE FIGHTERS DO ALL THE TALKING!

Welcome to the One Minute Meelee Fanon Wiki

WELCOME TO OMMM WIKI, WHERE YOU CAN WRITE YOUR OWN OMMS!

Write a description about your topic. Let your readers know what your topic is about and add some general information about it.

3: Do not create a page for a Melee/fighter and not work on it after. Though of course, they don't need to be done right away. And you can have match sales as well.

4: It is not okay to change somebody's battle without their permission. This is considered, Vandalism

5: No sockpuppeting. (Where you use more than one account)

6: Real life characters are allowed. However, no wikia users. With the only exception being a small cameo (Speedwaggon vs Sonic.EXE for instance)

7: Any battle created by an anon can be redone by a registered user. But, if you were to say create an account than the battle will be restored as your own version.

8: You can write other versions of people's fights, just ask for permission first. If they say yes, you can either use the tabber tool to separate the two versions on the page, or just create a new page all together with your username in parenthesis next to it. Though, people who have left the wiki don't need permission in order to make your own version, but if they rejoin it will be a Candidate for Deletion unless they say yes.

Want to delve early into some One Minute Melees written by some of the users? Here's some recommended reads!

Link vs Shovel Knight
Add a photo to this gallery

Ragna The Bloodedge vs. Nero

Wario vs King Dedede
Add a photo to this gallery 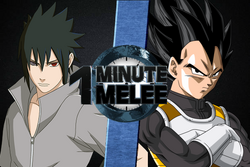 Erza Scarlet Vs Roronoa Zoro
Add a photo to this gallery
Retrieved from "https://one-minute-meelee-fanon.fandom.com/wiki/One_Minute_Meelee_Fanon_Wiki?oldid=64056"
Community content is available under CC-BY-SA unless otherwise noted.